Using an oil-based pore filler I have officially begun the finishing process on The Rufus. The three pictures show the dramatic effect this filler has on the wood. Before beginning, the wood seems dull and lacking personality. 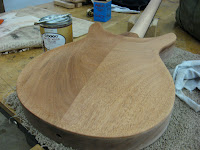 The filler compound was applied with a small brush then wiped off with a cloth. It will take several applications in order to fill the pores. 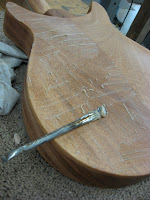 Pictured here is what the wood looks like with three coats of filler. It is really beginning to come alive. The effect will become even more complex when lacquer is sprayed onto the guitar.

Posted by Robert Marsh of at 1:44 PM No comments:

For the past two weeks I have been sanding The Rufus. Mahogany has very open pores. The two pictures show the pores of this wood. They don't look like much, but when it comes to applying lacquer they have gorge-crater-ish quality. Pores have to be filled in order to create a level surface for the lacquer. I have tried two methods and was not happy with the results. So, I came across a product the other day which will do the trick. Saturday I will begin the finishing process by using this filler.

Posted by Robert Marsh of at 2:33 PM No comments:

The Rufus, Shaping the Heel

The heel is shaped.

Posted by Robert Marsh of at 8:50 AM No comments:

The Rufus, Shaping the Heel 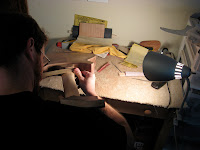 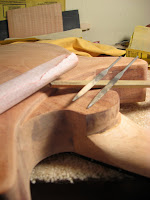 Rasps, files and sandpaper are what one needs to blend the neck and the body of the guitar together. The idea is to make it ergonomic for the player's hands. Which, will be Dr. Rufus.
Posted by Robert Marsh of at 11:39 AM No comments:

This is truly a piece of Colorado. This is a slab of Ponderosa Pine which has been killed due to the Pine Beetle infestation of the past few years. The mountain pine beetle is a species of bark beetle native to the forests of western North America. The beetle measures about 5 millimeters (picture). 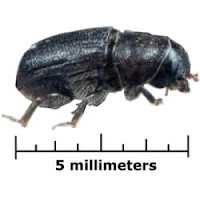 Mountain pine beetles inhabit pines, particularly the Ponderosa Pine. During early stages of an outbreak, attacks are limited largely to trees under stress from injury, poor site conditions, fire damage, overcrowding, root disease or old age. As beetle populations increase, the beetles attack the largest trees in the outbreak area. The trees respond to attack by increasing their resin output in order to discourage or kill the beetles. It isn't the number of pitch-out tubes that kill the pine tree but the beetles carry blue stain fungi which, if established, will block the tree resin response. This is the blue color you see in the picture. I feel this will make a cool top for an electric guitar. This piece will live again in the form of an instrument. Keep a look-out for the progress on this one. Don't know when I'll begin but I will let you know.

Posted by Robert Marsh of at 7:56 AM No comments:

The Rufus, Two are One 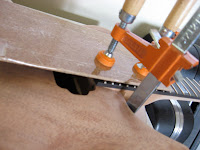 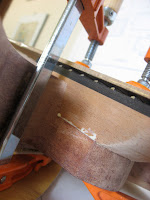 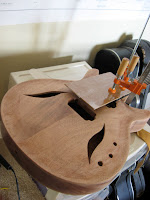 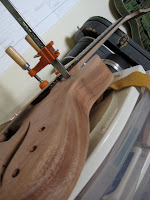 Over the past couple weeks The Rufus has been getting pore-filled and sanded in preparation for finish work to begin. Today I decided that the sanding was done to a point where the neck could be added to the body. This clamping arrangement will stay like this over-night allowing the glue to harden undisturbed. After this is completely dry, the neck and body will be blended together with rasps and files. This will make for a more comfortable instrument.
Posted by Robert Marsh of at 12:44 PM No comments:

Well, the top has been glued to the back/sides. I applied glue to the sides (kerfed edge) and using the "Go-Bar-Deck," clamped the the two together. After about an hour-and-a-half, the body was removed from the clamping deck. I then used a flush-cut bit in a laminate trimmer and cut the excess wood leaving what is beginning to look like a guitar body. 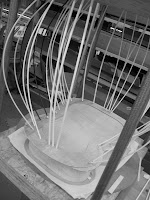 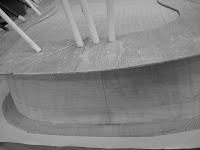 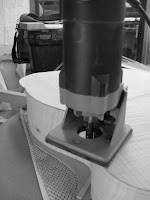 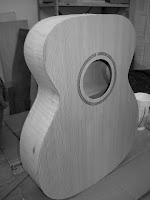 Posted by Robert Marsh of at 1:47 PM No comments:

The top braces have been shaped and sculpted to the point where the top rings nicely. This is what I was looking for. A nice low tone and sustaining ring. The pictures show the patterns. The next step will be to join the top to the back and sides to form the rough body. 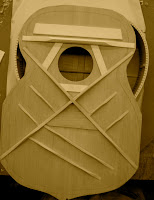 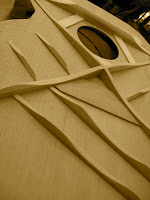 Posted by Robert Marsh of at 7:09 PM No comments:

Roy and his Guitar Meet

Posted by Robert Marsh of at 11:08 AM No comments:

Robert Marsh of
Marshwood Guitars creates one-of-a kind hollow body and solid body electrics for professional musicians and guitar enthusiasts. He really enjoys seeing ideas on paper coming to fruition in the form of an instrument. Located in Golden, Colorado, this beautiful place inspires beautiful work. This blog is dedicated to his clients, friends, and family, so that they may be a part of the guitar building process. Enjoy!